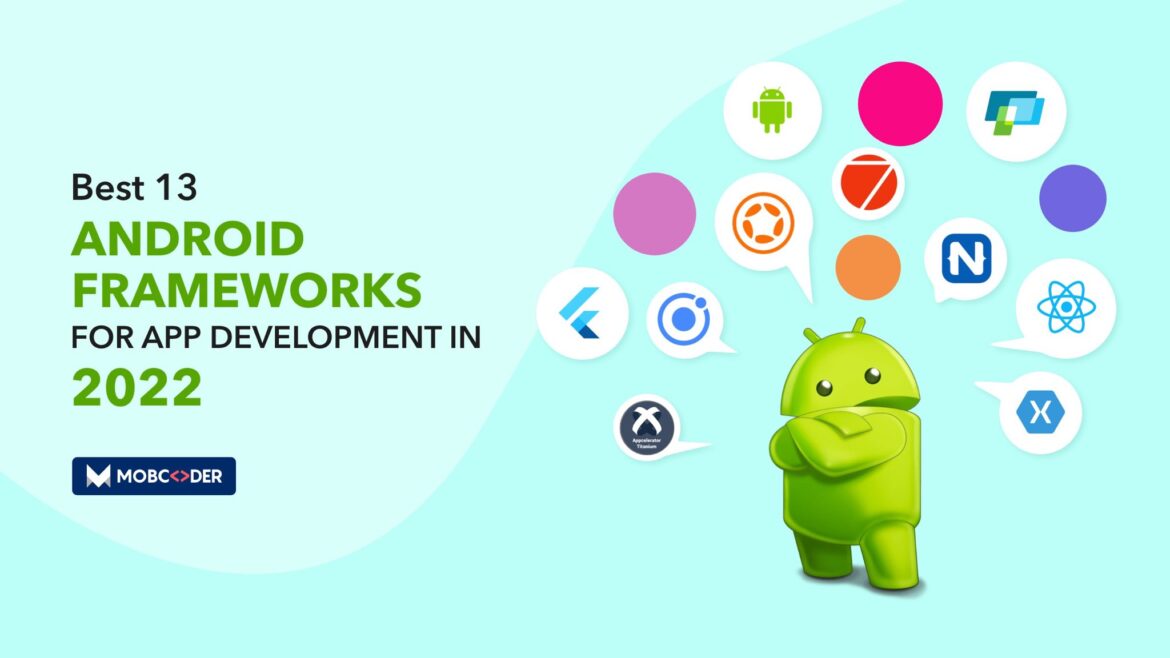 Android has evolved over time and is now considered to be one of the most popular mobile operating systems by having more than 2.1 billion active users as of this writing and that is expected to grow even further. There are many android frameworks for app development that offer amazing advantages for all mobile developers, including the ability to develop apps on a variety of devices or to multiple users.

Below is the handpicked list of the best Android UI frameworks for App Development in 2022:

This is an open-source android framework that allows developers to build stunning and interactive mobile apps using HTML5, CSS3, and JavaScript is called Ionic. It makes the process of developing an app so much simpler as all we have to do is learn web development languages like HTML5, CSS3, and JS in order to use them.

React Native open-source projects are awesome and a boon for developers who want to develop apps on all the platforms. Developers can build a native mobile application with a single JavaScript codebase.

React Native is built on the concept of ‘learn once and write anywhere’ while writing code in React Native you will be able to create it once then apply that same logic to other platforms.

It is free and open-source. Being a new platform, it has already made its place in Google Ad and comes with strong support for Google Ads. It uses one codebase and compiles to the native code using Skia, google’s 2D rendering which renders even on old android versions and iOS devices.

A flutter developer can write codes in Java, objective C, or swift. This android framework makes it easy to create integrated versions within a small period of time and without compromising the quality.

Native Android development framework is a platform that offers developers API frameworks and tools that enables them to build, test, debug apps on an android platform. It uses tools like a screen reader, rendering, themes, etc for Android and iOS.

Xamarin is an Open-Source Platform for building applications for Android programming language, iOS, Windows. NET. It has a friendly development ambiance that enables developers to write their business logic in a single codebase while achieving native performance.

NativeScript works with modern web technologies like CSS, XML, and JavaScript. Unlike other hybrid app frameworks on the market, NativeScript doesn’t use a ‘web view’ to render the app, which is the point of failure for products such as PhoneGap, Ionic, and Cordova. Instead, NativeScript runs your mobile apps directly inside the main native platform.

It is designed to develop hybrid mobile apps or web apps that are feeling native. Its templates are compatible with all the major platforms like Android, Windows, ios platforms, and many more.

Time is money and Corona SDK saves you tons of it. The days of spending weeks or months developing apps in Objective-C or Java are over. n as little as 2 days deployment time. With this, you will be able to build a fully-functional and beautiful application for the customer that is comparable with those of more expensive applications.

Appcelerator Titanium is an open-source software framework for the creation of web and mobile applications, which is a popular cross-platform app development tool. This android framework is mostly preferred by developers as it gives access to native APIs.

It also uses JavaScript to write native code. These features make it one of the best android frameworks for developers.

More importantly, you can develop apps for different platforms using a single codebase.

App Builder is an active app development software that has been built specifically keeping in mind the needs of non-technical professionals.

Another famous framework for building cross-platform mobile applications with the help of HTML5. Sencha Touch allows creating responsive interfaces and provides everything you need to create an app with good performance, multilingual interface, offline capabilities, and synchronization.

In this guide, we have shared some of the best Android UI frameworks that make the app development process easier and faster. On the basis of this discussion, you will be able to make or break your development experience as provided by your mobile app development company in usa.

Mobcoder can align your taste and style together. It is a reliable mobile app development company in usa with which you can get started today!

How to calculate the distance from the projector to the screen

10 Things You Need To Know Before Estate...

Why Free Business Checking Accounts Are The Best...

Encouraging Young Children to Take Care of their...

8 Reasons to Streamline the Processes in Your...

What is different between to commercial and residential...